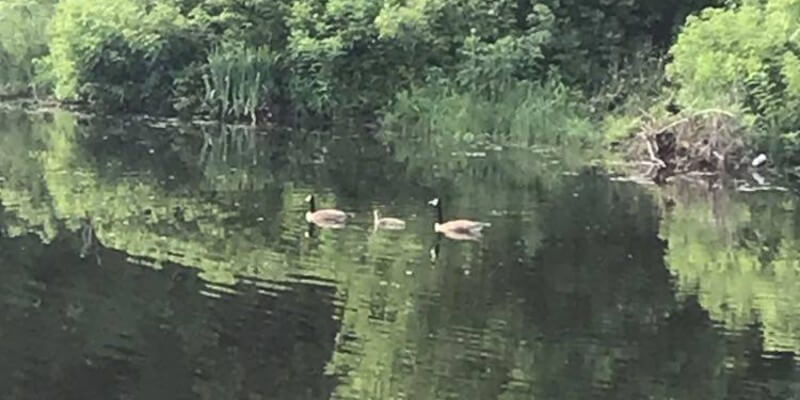 The other day I went for a walk in my favorite park near my home. It’s a beautiful place where I often walk and pray. So many times, I feel the presence of God there in the rustling grasses and flowers. It is a place to walk and worship or say a prayer to stop worrying if my mind is troubled. I always leave feeling refreshed and cheered up.

But, the other day, as I started to ascend the trail behind the pond, a couple came walking hurriedly down the hill towards me. “We turned around,” they said excitedly. “You did? Why?” I asked. “There is a big, black snake lying totally across the path up there. We turned right back!” Watch out as you go around the bend and the sun hits your eyes.”

I continued on, stubbornly not wanting the snake to interfere with my routine which is: I go up the hill. I listen to worship music. My heart explodes with joy and hope as I walk in the sun and hear the words of favorite songs.

I did not want to give that up. But their description of the snake was a little daunting. The path is asphalt, about 5 or 6 feet across. If the snake was lying stretched out fully filling the path, it would be one big snake!

Curiosity and stubbornness made me keep on. I LOVE this walk. Do you have something like this in your life that gives you such peace and fortifies you so much? This park, this walk does that for me. I kept thinking, “Maybe they’re right, but maybe the snake is gone by now.” I don’t want to give this up!

I kept on walking listening to “O the Glory of His Presence.” The sun was so bright. The clouds big and full. The prairie grasses were swaying, as if to the music. (I live in the Midwest). Somewhat cautiously I climbed, higher and higher.

And then I saw the snake. To be fair, perhaps it was a different one, but this was not an all black snake. It had a black stripe and it was a pipsqueak. I mean it looked like Snake Junior.  I began to laugh. The little thing made a darting move at me as if to say, “I’m scarier than you think. Really!” But I tapped my foot and the poor little thing raced away across the path and into the grass. 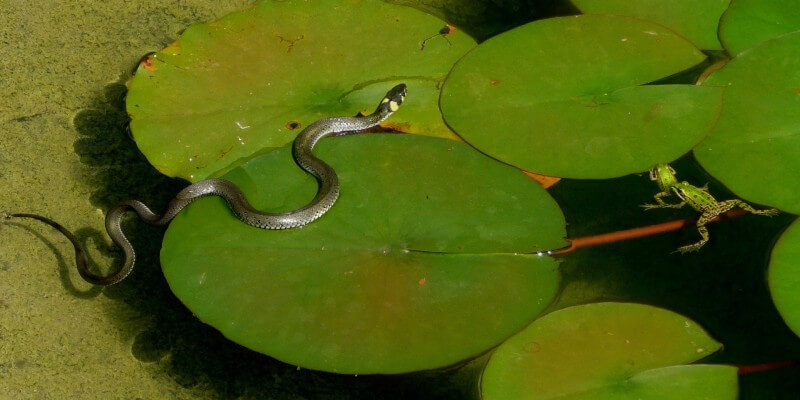 He was tiny. Far smaller than the snake in this picture above that is, itself, small (see the frogs in the pond). Fear had exaggerated the size of the snake and the level of its threat.

I told my husband about this when I got home and as we talked, I remembered a second snake story.

One time my daughter and her best friend were swimming in the lake near a former home. They were young teens having a great afternoon. They dove under the water and came up. Just as they did, a snake came out of the water and was looking them in the face. If the snake could have screamed, he would have. All three of them turned and swam away as fast as they could possibly go!

I think the snake was more scared than they were!

Fear and Worry Make Us Retreat from Life

Now, this story of the snake causing the couple to retreat from their walk turning out to be a tiny, non-threatening creature gives us a good metaphor for explaining how fear and worry work on us.

We sense a threat. Fear rises up in us. Our imaginations “go wild.” And then, we retreat, and oftentimes, miss out on something, maybe many things. Thoughts of “what could happen” fill our minds and paralyze us.

My life has been filled with terrible misfortune, most of which never happened - Michel de Montaigne Click to Tweet

Don Joseph Goewey, author of The End of Stress, wrote in a blog article about the results of a study which showed that, “Lo and behold, it turns out that 85 percent of what subjects worried about never happened, and with the 15 percent that did happen, 79 percent of subjects discovered either they could handle the difficulty better than expected, or the difficulty taught them a lesson worth learning. This means that 97 percent of what you worry over is not much more than a fearful mind punishing you with exaggerations and misperceptions.”

A Bible Story of Worry and Loss

A classic example of fear stopping people from going forward and enjoying all that life has for them, all that God has for them, is the story about the 12 men sent to spy out the Promised Land found in the Bible in Numbers 13.

In this story, God told Moses, the leader of the Israelites who had escaped slavery in Egypt, to send 12 men to explore Canaan (the Promised Land). God said, “I am giving this land to the Israelites.” (Numbers 13:2) The men spent 40 days exploring. When they came back, they were carrying a branch with a cluster of grapes, along with some pomegranates and figs.

Upon returning, the men gave a report, “We went into the land to which you sent us and it does flow with milk and honey! Here is its fruit. But, the people who live there are powerful, and the cities are fortified and very large.” (Numbers 13:27-28 NIV)

As the men began to speak fear and worry, Caleb (one of the 12) interrupted them and said, “We should go up and take possession of the land for we can certainly do it!” (Numbers 13:30 NIV)

But there was no trust in God’s wanting to give them the land, no prayer to stop worrying. The 10 reluctant men just said, “We seemed like grasshoppers in our own eyes and we looked the same to them.” (Remember fear “magnifies things?”) (Numbers 13:33 NIV)

With that bad, fearful report, the 10 reluctant men injected terror into all the hearts of the people. The result – God let the people wander 40 years in the wilderness. Their generation would pass away and not enter into the beautiful land that God had promised and had readily desired to give to them. 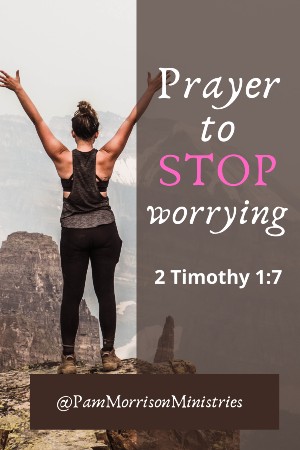 We don’t want to be among those who turn back, give up, and live paralyzed. God has SO many things set aside in this life for us to experience. God has wonderful plans for us. Yes, some hardships, some difficulties, maybe many, enter into our lives. But God says:

“I know the plans I have for you, plans to prosper you and not to harm you, plans to give you hope and a future.” (Jeremiah 29:11 NIV)

So, let’s not miss out on anything because we gave into fear and worry. Here is a prayer to stop worrying:

Heavenly Father, we ask for your help. You know we are prone to worry, even to despair. Our minds too often go to the worst case scenario as we imagine frightening possibilities in challenging situations. And sometimes, like the 12 men in Canaan, we see only “giants” in front of us.

O God, some see a land filled with milk and honey. Some only see menacing giants in the land. We want to see the milk and honey. Keep our mind on your goodness and reliability. Help us to wash our minds with your word and all its promises.

Fear is a spirit. Don’t let it infect us. Rather, give us power and love and self-discipline that come from Your Spirit in us. We love you, Lord. Make us brave for life! This is our prayer. In Jesus’ name, Amen

There are 100 verses about fear and anxiety here.

What Does the Bible Say about Overcoming Fear

How to Avoid Shutting Down When Overwhelmed

Make Us Brave for Life