Why Christians Celebrate Advent | Finding Hope in a Dark World 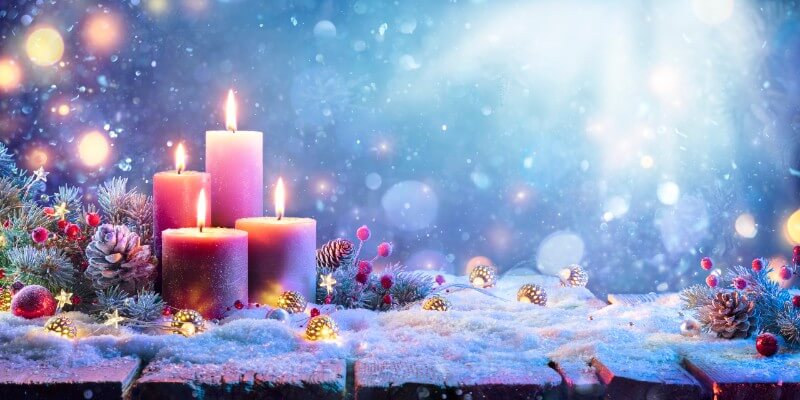 “What is hope? The famous Christian writer, C.S. Lewis, wrote that hope is a “continual looking forward to the eternal world.”  But hope is sometimes hard to find and often easy to lose.  When circumstances are very, very difficult, we can feel hopeless.  And that is why Christians celebrate Advent, four weeks just before Christmas.

The idea of Advent traditions is to pull our eyes back to Jesus and the truth that His light has already broken into the dark world.  The darkness has not overcome it and it never will.

In Jesus 'was life, and that life was the light of all mankind. The light shines in the darkness and the darkness has not overcome it.' John 1:4-5 NIV Click to Tweet

Let me tell you a story about light…

When my kids were little we would take their dad to a small town near Branson, Missouri to celebrate his birthday.  We’d stay in a motel, swim in the pool, fish in the lake, ride go-karts and so on.  Homemade chocolate birthday cake was also part of the itinerary.

The kids delighted in putting re-lighting candles on his cake so that when their dad tried to blow them out, he would seem successful, then all the candles would flare up again.  Of course, the kids would be in hysterics, rolling on the motel beds with laughter while dad did an Oscar winning performance of being surprised – yet again! 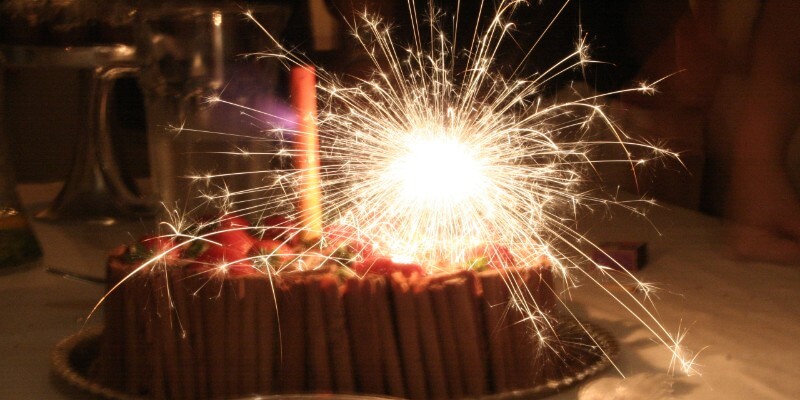 Advent is a festival of relighting candles

Thinking about Advent brought that birthday tradition to mind.

Sometimes our world seems so dark.  It can feel as if “all the candles have been blown out.”  I’m sure endless generations have had this perception again and again with wars, famine, disease, and corruption.  In response, we feel SAD.

But when we start the countdown to Christmas and begin to light the Advent candles, lighting first one, then two, then three, until we reach Christmas, then light seems to be everywhere – on our houses, stores, streets,  churches.  At the darkest time of the year, a single candle turns into two, then three, then, often, entire sanctuaries being filled with light as worshippers lift up their candles and sing Silent Night on Christmas Eve. Hope and joy rush back in.

We, in effect, live out the words of the prophet Isaiah often spoken at the beginning of Advent: “The people walking in darkness have seen a great light, on those living in the land of deep darkness a light has dawned…For to us a child is born, a Son is given…Isaiah 9:2, 6 NIV

This festival of increasing light

As Christians move towards Christmas and light an Advent candle each week, they go from just aching for a better world to being reminded (full of joy) that Jesus Christ has already come and will come again.  “The Word became flesh and made His dwelling (that literally means: pitched His tent) among us.”  John 1:14 NIV

Advent customs are not something all Christians do.  But if you don’t, it might be a happy experiment to try them out – for stirring up hope in your heart. 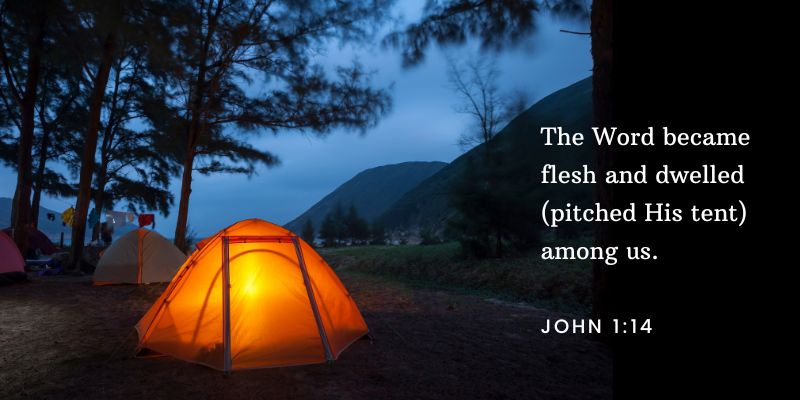 Hope is essential to life

We literally cannot live without hope.  Human beings have to be able to look ahead and say, “There’s a reason for living.” And they have to have those hopes met.

Remember the Bible verse about hope without fulfillment?  It says:

“Hope deferred makes the heart sick, but a longing fulfilled is a tree of life.”  Proverbs 13:12 NIV

Men who had hope survived a war

In World War II, around 25,000 men were held in Japanese POW camps.  A psychologist, Julius Segal wrote about them in a book called Winning Life’s Toughest Battles.  He said:

“Forced to exist under inhumane conditions, many of them died.  Others, however survived and eventually returned home.  There was no reason to believe there was a difference in the stamina of these two groups of soldiers.  The survivors, however, were different in one respect:  They confidently expected to be released someday.

They talked about the kinds of homes they would have, the jobs they would choose, and even described the person they would marry.”

Hope made all the difference for the ones who lived.  It is vital, and Advent, as a spiritual practice, is for our benefit.  It helps us, by lighting candles, singing songs, reading certain scriptures, and praying, to remember Christ has come and He will come again.  We need not despair.

And we remember: Christ has come. He is in our midst. Christ will come again. We live in the now and not yet. Click to Tweet Very early on, in about the 4th century of the Church, Advent began to be practiced – largely as a time of fasting in December up until Christmas day.

Later on, it would start on the 4th Sunday before Christmas as it is celebrated today.

What do the candles mean?

Typically, on Advent wreaths, you’ll see four candles of the same size, and perhaps a larger white candle in the center.  The four candles may all be purple, or a dark shade of blue.  Or, you may see three purple candles and one pink.  What do the candles represent as you light each one?

Well, just as the colors vary – people may have different names or ideas about what each candle represents.  Nobody is doing it wrong.  It’s just that there are many characters and themes in the Christmas story and they are used to name the candles.

Other customs associated with Advent

Many people will use an Advent calendar, a custom that took hold in the early 1900s after a German printer, Gerhard Lang, began making calendars out of cardboard with pictures or bible verses behind doors. (for more info, see this article on Crosswalk)

These calendars have advanced into having all kinds of things behind the doors from Legos to chocolates – which has led to many funny memes.  In them, people will say, “I’ve eaten all the way (through the chocolates) to Christmas and it’s only day one of Advent!”

And there is another decoration, many people love to use, the Jesse tree, which began to be used in medieval times to show the flow of redemption from the Old Testament to Christ. On these trees, ornaments are hung of the people named in Jesus’ genealogy from the Bible. 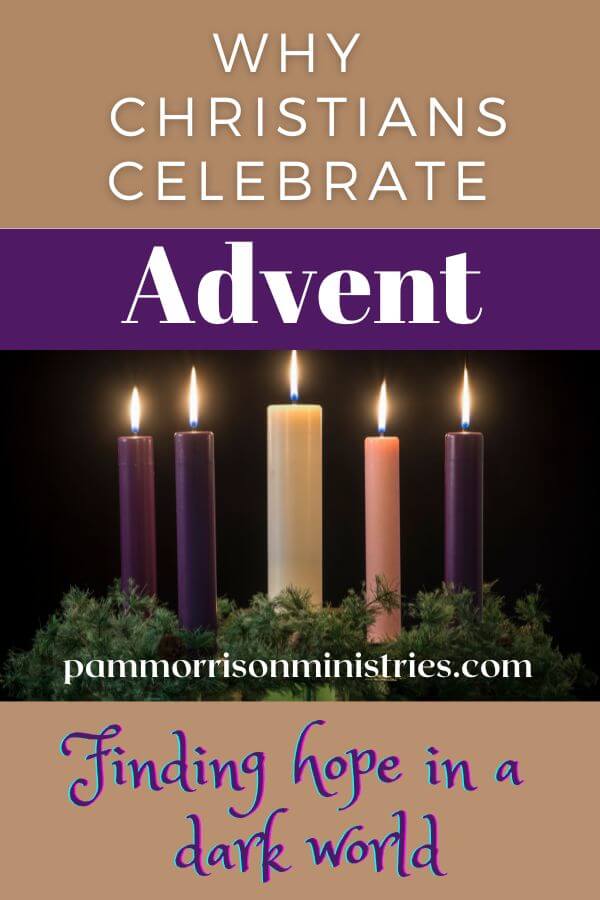 Returning to the theme of hope

When the first candle of Advent is lit, the hope candle, this scripture is typically read, Isaiah 9:2, 6-7:

The people walking in darkness have seen a great light; on those living in the land of deep darkness, a light has dawned.  For unto us a child is born, to us a Son is given, and the government will be on his shoulders.  And He will be called Wonderful Counselor, Mighty God, Everlasting Father, the Prince of Peace.

Of the greatness of His government and peace there will be no end.  He will reign on David’s throne and over His kingdom, establishing and upholding it with justice and righteousness from that time on and forever.  The zeal of the Lord Almighty will accomplish this.”

Can you think of any words more hope-filled?

Isaiah wrote of the coming Messiah.  He saw prophetically that the darkness and sorrow in which the people lived would be overcome.  Someone was coming who would be the Prince of Peace, the Mighty God, the Everlasting Father.  “Of the greatness of His government and peace there will be no end.”

Every year as we begin the countdown to Christmas again, if you are an Advent observer, you can begin to say these scriptures and sing the songs that speak of Jesus who was to be born.  But we know HE WAS BORN.  He lived and died and rose again, for poor, lost humanity.

And now He lives forever and will come again.  And “whoever lives and believes in Him will not die.”  (John 11:26 NIV)  And for these reasons, as we dwell on these truths in Advent, hope can swell up and overwhelm anything that feels dark and hopeless in our lives.  God has the final word.

As we light the candles, a prayer for hope

Lord as we light these candles and remember the prophets’ declaration of the Messiah coming into the world, let us absorb Your gifts of hope, joy, and peace in every Advent season.  Help it to be true of us that we have a faith that is confident in what we hope for and sure of what we do not yet see.

We believe every one of Your promises is yes and amen in Jesus Christ.  All the things we hope and yearn for in You will come to pass.  We know this because Jesus has already come once.  He is with us now and He will come again as promised.  In You, we are not afraid.  Anchor our hope in You always.  In Jesus’ name.  Amen

Questions to reflect on:

If a post touches your heart, please share as that makes sure many will be reached by the good news of Jesus.  Connect with me on all social media platforms on link tree

How to Get Hope Back in Your Life: A Christmas Message of Hope